On April 23rd, Kino Lorber Will Let You SCREAM AND SCREAM AGAIN! 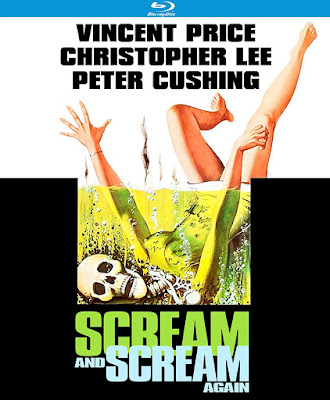 A SERIAL KILLER IS LOOSE ON THE STREETS OF LONDON IN THIS 1970 CLASSIC!

Somehow I have failed to see Gordon Hessler's SCREAM AND SCREAM AGAIN, which boasts the amazing talent of Vincent Price, Christopher Lee, and Peter Cushing! (Which reminds me.... I still haven't seen HOUSE OF THE LONG SHADOWS either! Doh!) Out of print since Twilight Time's Limited Edition in 2015, SCREAM AND SCREAM AGAIN returns to Blu-ray (after being pushed back twice) courtesy of Kino Lorber Studio Classics!

Synopsis: A serial killer who drains his victims' blood is on the loose in London! They hunger for power, thirst for blood–and make each helpless, pleading victim SCREAM AND SCREAM AGAIN! Horror legends Vincent Price (TALES OF TERROR), Christopher Lee (HOUSE OF THE LONG SHADOWS) and Peter Cushing (MADHOUSE) star in this masterwork of style and suspense about a group of sadistic madmen plotting to take over the world–one severed body part at a time. 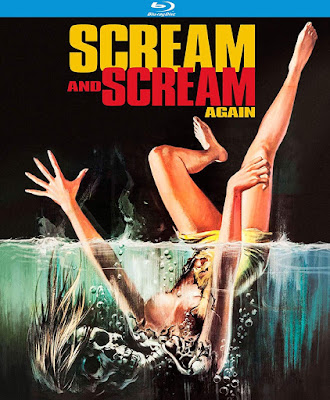 Directed by cult filmmaker Gordon Hessler (THE OBLONG BOX) with a screenplay by Christopher Wicking (CRY OF THE BANSHEE) and based on a novel by Peter Saxon (Murder at Site 3). Co-starring Judy Huxtable (THE PSYCHOPATH).

Extras:
SCREAM AND SCREAM AGAIN is now going to be released on Tuesday, April 23rd wherever Blu-ray discs are sold and should cost approximately $20. Order a copy now from AMAZON or DIABOLIK DVD and start counting down the days!