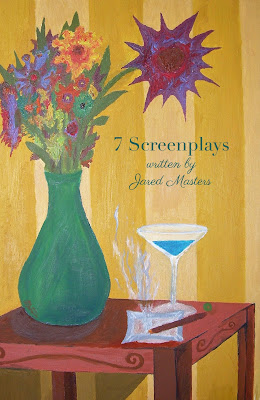 Jared Masters is the President of Frolic Pictures and released a book containing seven of his earliest screenplays last March! This 700-page book includes the scripts for DIE HIGH, CURIOUS AND LIKING IT, ZOOMLAND, BRATWURST, GERALD'S MISTRESS, THE JILTED LOVER, and ADDERALL: THE MOVIE.

Here's a message about the book from Jared Masters himself:

"It has been said that a screenwriter must write seven scripts before it “clicks” in their mind and finally something worthwhile may be created. Perhaps this knowledge holds merit because after writing all these I wrote SLINK, which was produced a few years later and gained some attention in the horror community.

It takes a great deal of time and energy to develop one’s style, and as I look back on these seven screenplays I see how I have grown as a writer but at the same time appreciate the vulnerability and freshness that blanket my early work. Perhaps someday some of them will be granted the highly coveted voice of the silver screen.

I started writing poetry in 2000, at the age of fourteen and soon took much interest in the screenwriting form. I read many books on the subject and, in 2003, based my first full-length script, DIE HIGH, on a personal experience that somewhat rattled me. I then adapted many of my preexisting poems into my next screenplay, CURIOUS AND LIKING IT. Its story is very experimental and unlike anything else I’ve yet attempted.

My interests in the bizarre and avant-garde seem to have continued in ZOOMLAND (originally titled ALONE IN A BOAT). I recently modified it to be somewhat of a children’s story and quite proud of it for its unique storyline and imaginative setting. I also tried my hand at more serious narrative dramas and dark comedies, such as GERALD'S MISTRESS, BRATWURST, and THE JILTED LOVER. These three have a similar tonality to them, and perhaps helped nurture my flare for dialogue.

ADDERALL: THE MOVIE is definitely one of my most commercial, and I feel it could do well if made. It may be worth mentioning that these scripts were written with the intention of being sold to a major Hollywood studio.  When I realized how difficult it is to penetrate those gates I grew weary and concerned that my stories would never reach the distant light of a projector’s lamp.

I never had the intention or means to produce my own scripts, until one day in 2009, when I discovered a little film called NUDE ON THE MOON by Doris Wishman. The vast world of exploitation cinema was opened and a new realm of possibilities was revealed to me. Since then, I have produced a dozen feature films, all which I have written, but written with the budget in mind.

This is a concept many writers simply cannot grasp, and that may be fine for them, but for me it was essential in turning a stack of paper most people would have no desire to read, into an actual movie many are willing to experience. Some writers have been fortunate to have their very first script produced to great success, but this is comparable to a freak accident, and certainly won’t apply to most. It makes sense to me that if you write long enough, and hard enough, something will eventually be considered truly good."

7 SCREENPLAYS is currently available in paperback at AMAZON and BARNES & NOBLE. If you're a fan of Jared's films (e.g. AFTER SCHOOL MASSACRE, BALLET OF BLOOD, HOLLYWOOD A GOGO), or are an aspiring screenwriter, then you may just want to get yourself a copy ASAP!

Posted by The Vault Master at 1:35 AM