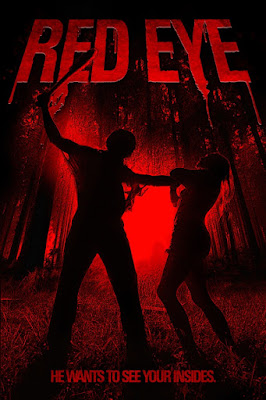 Slasher cinema is still alive and well, as evidenced by RED EYE. Featuring a masked backwoods killer, Tristan Clay's film looks to keep the torch burning for a sub-genre that peaked back in the 80s. RED EYE is currently available on iTunes, Amazon, Vudu, Google Play, and Xbox Live!

Synopsis: There's a legend about a violent, deranged masked murderer, who dwells in the backwoods of Black Creek, West Virginia. Gage Barker (Scott King), a young man who grew up on the tales of "Red Eye" as a kid, learns that there could be some truth behind these folk tales.

With a group of his friends and his camera equipment in tow, Gage hikes into the woods to seek out the legendary killer, or prove that he is nothing more than a myth. But the would-be documentary filmmakers soon learn that they should have left well enough alone!

You can watch RED EYE on Amazon Instant Video right now! And if you have an Amazon Prime Membership, you can stream it for FREE! Prefer physical media? Expect a DVD of RED EYE to be announced in the near future!

Posted by The Vault Master at 3:18 AM