Arrow Video's Limited Edition Blu-ray of BASKET CASE is the Definitive Release We've Been Waiting For! 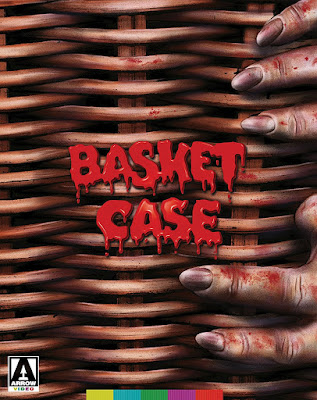 FANS OF FRANK HENENLOTTER'S TWISTED CLASSIC REJOICE: YOU WON'T HAVE TO BUY ANOTHER COPY OF "BASKET CASE" EVER AGAIN!

Something Weird Video released a pretty solid Blu-ray of BASKET CASE back in 2011, and I think we all assumed that it was the best release the film would ever have. Seven years later, Arrow Video has come along and spoiled us rotten with an all new 4K transfer of BASKET CASE, and a slew of new extras!

Synopsis: THE TENANT IN ROOM 7 IS VERY SMALL, VERY TWISTED, AND VERY MAD. The feature debut of director Frank Henenlotter (BRAIN DAMAGE, FRANKENHOOKER), 1982's BASKET CASE is perhaps his most revered - a riotous and blood-spattered midnight movie experience, now immortalized in a lavish new 4K restoration by the Museum of Modern Art (MoMA).

Duane Bradley (Kevin Van Hentenryck) is a pretty ordinary guy. His formerly conjoined twin Belial, on the other hand, is a deformed, fleshy lump whom he carries around in a wicker basket. Arriving in the Big Apple and taking up a room at the seedy Hotel Broslin, the pair set about hunting down and butchering the surgeons responsible for their separation. But tensions flare up when Duane starts spending time with a pretty blonde secretary, and Belial's homicidal tendencies reach bloody new extremes.

Filmed on a shoestring budget against the backdrop of 1980s New York (where the movie would become a staple of the infamous 42nd Street grindhouse circuit), BASKET CASE has clawed its way from its humble origins to become one of the most celebrated cult movies of all time.

Egads! This is clearly the last copy of BASKET CASE any of us will have to buy, so hurry up and snag yourself a copy of this limited edition release! Arrow's BASKET CASE Blu costs anywhere from $23 - $30, and is now available at AMAZON, BULLMOOSE, and DIABOLIK DVD. I should also note that if you buy this title from Diabolik, you will get a super limited BASKET CASE enamel pin with your order! (While supplies last!)