The MVD Rewind Collection Continues to Impress With Their New Special Edition Blu-ray of BLACK EAGLE! 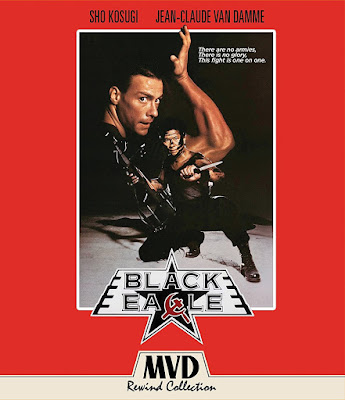 Thus far, I've missed out on all three of MVD Rewind's inaugural releases (DOA: A RIGHT OF PASSAGE, ATTACK OF THE KILLER TOMATOES, and now BLACK EAGLE), but plan on catching up when I get some expendable income. To be honest, I've never seen BLACK EAGLE (shocking as I am an unabashed lover of all things Van Damme), so I'm eager to scope out this disc in the near future!

Synopsis: After an F-11 gets shot down over the Mediterranean Sea, The U.S. government cannot afford to lose the top-secret laser tracking device that was on board. But unfortunately, the KGB team lead by the infamous Andrei (Jean-Claude Van Damme, BLOODSPORT, LIONHEART, UNIVERSAL SOLDIER) are beating the CIA in the race to find it.

Extras:
With two cuts of the film, and nearly two hours of bonus content, this has to be the most love any label has ever given BLACK EAGLE! MVD Rewind's 2-Disc Special Edition of this title is currently available wherever discs are sold, and ranges from $25 - $30. You can order a copy now from AMAZON, BULLMOOSE, or DIABOLIK DVD!