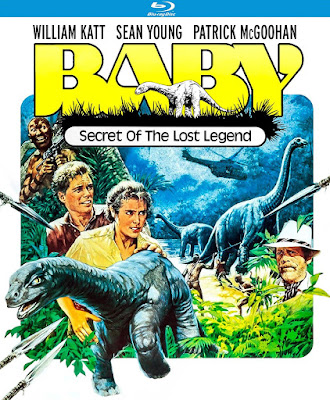 THE CLASSIC DINOSAUR ADVENTURE, "BABY: SECRET OF THE LOST LEGEND," COMES TO BLU-RAY ON FEBRUARY 13TH WITH NEW EXTRAS!

Already available on a relatively inexpensive Blu-ray from Mill Creek Entertainment (that allegedly contains a BETTER transfer of the film than this release, but most likely used the same one), Kino Classics' disc offers up spiffy new cover art, 5.1 audio, and extras! As a fan of this film (I absolutely LOVED it as a kid) I'm tempted to buy this release, but I think I'll wait a bit for the price to drop. However, don't let that stop you from adding this (tonally odd) dino-classic to your collection!

Synopsis: Time is running out to save the greatest discovery in 200 million years! Join the thrilling expedition deep into the forbidding African jungle, where two modern scientists are on the trail of an amazing discovery! While studying rare fossils, they uncover a living, breathing legend - an enormous pair of Brontosauruses and a hatchling dinosaur alive in the heart of the rain forest! To protect this rare find, they must escape a world of unseen and certain danger. Through a tribe of mystical native warriors, and into the grasp of an evil scientist, it's the ultimate battle to survive!

Extras:
BABY: SECRET OF THE LOST LEGEND arrives on Blu-ray Tuesday, February 13th and is priced between $18 - $20! You can order a copy right now from AMAZON or BULLMOOSE!