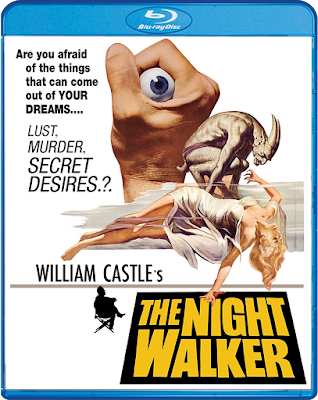 SCREAM FACTORY'S RELEASE OF "THE NIGHT WALKER" IS A DREAM COME TRUE FOR WILLIAM CASTLE FANS!

Scream Factory dredges up another classic title that I've never seen! As a fan of Castle's other cinematic efforts (e.g. 13 GHOSTS, HOUSE ON HAUNTED HILL, and THE TINGLER), I am stoked to finally be able to see this lesser-known feature in high-definition!

Synopsis: "Another frightening film from the mind of Robert Bloch, author of PSYCHO!" Barbara Stanwyck and Robert Taylor, reteaming for their first film following their divorce(!), star in this intense thriller about a wealthy widow who is haunted by her husband and seduced by a handsome stranger – all in her dreams!

Following the death of her millionaire husband, Howard (Hayden Rorke), Irene Trent (Stanwyck) endures dreams so real and terrifying, that she finds herself trapped in an eerie world existing between fact and fantasy. Isolated from the world by her husband's possessive nature, Irene feels there is no one she can turn to except for his personal attorney (Taylor), the only visitor Howard ever allowed to the house.

But even as her dreams begin to take vivid shape, Irene begins to walk into a very real nightmare of deception, murder and betrayal!