SAFE INSIDE Now Streaming on Amazon.com For FREE (for Prime Members)! 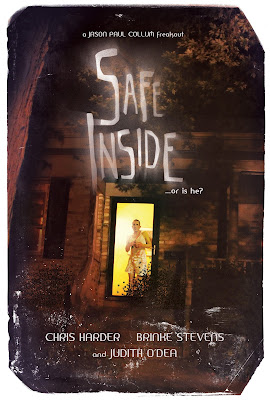 JASON PAUL COLLUM'S "SAFE INSIDE" IS CURRENTLY FREE TO WATCH IF YOU HAVE AN AMAZON PRIME ACCOUNT!

Because I spend so much dough at Amazon (it's impossible not to when you post about upcoming DVD & Blu-ray titles every week!), it was a no-brainer to sign up for Amazon Prime. (CLICK HERE to try a 30-Day Free Trial!) Along with unlimited two-day shipping on nearly anything, there are other benefits: You can borrow Kindle e-books, and stream over a million songs, as well as thousands of TV shows and movies for absolutely free!

And speaking of freebies... a recent Tempe Entertainment title is now streaming on Amazon Video free of charge for a limited time. So take advantage and give SAFE SPACE a look won't you?

Synopsis: With winks to slow-burn 70s suspense classics like BURNT OFFERINGS and DON’T BE AFRAID OF THE DARK, SAFE INSIDE follows an already disturbed man through one unfortunate night of creaking walls and lurking shadows in the home of his deceased mother. He suspects something is in the house with him, but will anyone believe someone whose mind has already cracked?

The thireenth film written and directed by Jason Paul Collum (SCREAMING IN HIGH HEELS), SAFE INSIDE joins the filmmaker’s other titles already available for streaming on Amazon Video, including OCTOBER MOON, OCTOBER MOON 2: NOVEMBER SON, SHY OF NORMAL, and SOMETHING TO SCREAM ABOUT. Collum’s debut feature, the dark teen thriller 5 DARK SOULS, is also free to watch on Amazon!

CLICK HERE to stream SAFE INSIDE on Amazon, or if you prefer physical media, get it on DVD or Blu-ray! To see Tempe Entertainment's full digital catalog, CLICK HERE.