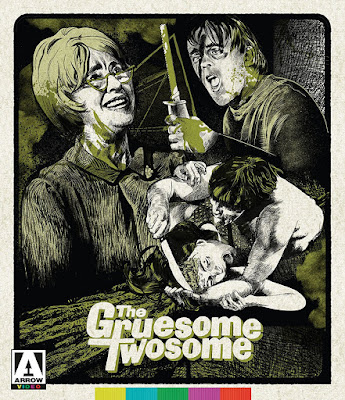 "THE GRUESOME TWOSOME" GETS A SPECIAL EDITION BLU-RAY THAT IS PACKED WITH EXTRAS!

I've only seen a handful of H.G. Lewis' films (and briefly met him once), and while I can't say I love them, I do appreciate The Godfather of Gore's contributions to cinema! Because without BLOOD FEAST, "splatter flicks" may never have taken off, and the Horror genre as a whole would have been duller for it. That being said, THE GRUESOME TWOSOME sounds like a good time, and Arrow Video's Blu-ray of the film is definitely a winner!

Synopsis: After dabbling in the unlikely world of children’s entertainment with the likes of Jimmy, the Boy Wonder and The Magic Land of Mother Goose, in 1967 “Godfather of Gore” Herschell Gordon Lewis returned to genre he helped create with the delightfully depraved THE GRUESOME TWOSOME!

The young women of a small-town American college have more than just split-ends to worry about… Down at the Little Wig Shop, the batty Mrs. Pringle and her socially-inept son Rodney are procuring only the finest heads of hair – by scalping the local co-eds! Can they be stopped before they clear the entire campus of luxuriant-haired ladies?