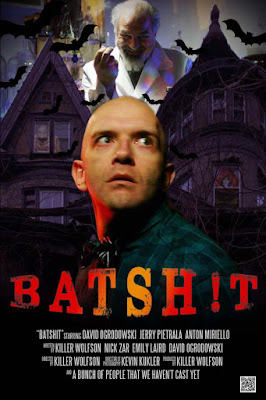 About year ago, I did an Indie Filmmaker Spotlight piece on Todd Wolfson, who was just finishing up work on his third low-budget horror short, SPONGE. Todd's now stepping up his game and doing a feature film called BATSH!T, which was heavily inspired by EVIL DEAD II, BEETLEJUICE, A NIGHTMARE ON ELM STREET, THE SHINING, LOST HIGHWAY, and other movies that helped usher in his deep-seated love for the Horror genre.

Synopsis: Felix is just an ordinary guy that's down on his luck. Shortly after losing his job, a typical trip to the pharmacy results in Felix accidentally dosing himself with a powerful hallucinogen. Unable to differentiate between fantasy and reality, he is about to go on a very strange trip! BATSH!T follows Felix's experiences as he interacts with his uncontrollable hallucinations over the course of forty-eight hours, both at home, and within the confines of Trundle Manor.

Crowdfunding Campaign Info: BATSH!T creator Todd Wolfson is currently trying to raise $2,500 with a GoFundMe campaign. Those funds will go towards special effects, make-up, props, catering, editing, and various BATSH!T-related perks! Rewards include: Screen credits, BATSH!T postcards, baseball caps, tickets to the film's premiere, a role in the film, posters, BATSH!T wine, and more! If you're interested in donating, CLICK HERE and be sure to share the campaign link on social media! To get a taste of what BATSH!T will be like, take a peek at the new teaser below.


If you liked what you saw, then definitely consider donating a few bucks to help Todd Wolfson and his crew complete the film! Visit BATSH!T's Official Facebook Page for behind-the-scenes photos, and continued updates on the film's status! Also be sure to subscribe to Todd's YouTube Channel and watch his previous short films!

We'll be keeping a close eye on this independent production Vault Dwellers, so stay tuned for further updates as BATSH!T is eventually completed and released!

Posted by The Vault Master at 3:26 AM