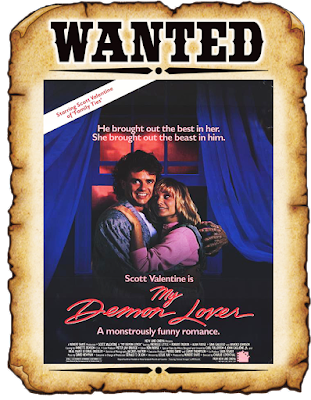 Decades ago, when I was a fervent collector of VHS tapes, I would scour the tables and racks of various video stores and liquidation outlets. This allowed me to build up my collection fairly quickly (and cheaply), and I discovered many obscure titles that still haven't made the leap to DVD or Blu-ray to this day!


Synopsis: Denny (Michele Little - SWEET REVENGE, RADIOACTIVE DREAMS, APOLLO 13) doesn't have much luck with love. (Maybe it's because she's named after a restaurant chain?) But after her most recent breakup, she meets Kaz (Scott Valentine - TO SLEEP WITH A VAMPIRE, CARNOSAUR 3: PRIMAL SPECIES, Black Scorpion), a homeless street musician with a startling secret: Whenever he becomes aroused, he sprouts horns, claws, and wings!

Eventually Denny starts falling for her demon lover, but their relationship hits a bump when the bodies of women start piling up around New York City! Is Kaz losing control of his lustful alter-ego, or is another culprit on the loose? Either way, he must find the answer in order to clear his conscience, find true love, and break his curse!


It's been a while since I last watched MY DEMON LOVER Vault Dwellers, but I do have some fond recollections of it. While Scott Valentine is kind of out of his element, the movie does have a fun premise and some surprisingly good practical effects. Though I can't classify this movie as some long lost classic, I feel like MY DEMON LOVER has been unfairly cast aside, and is more than deserving of a legit Blu-ray release!

Availability: Originally released on VHS (and Laserdisc?!) by RCA/Columbia Home Video, MY DEMON LOVER would get a second go on video tape in 1998 when it was re-released by New Line Home Video. Imagine my absolute shock when I discovered that it is currently available to stream (or buy) on Amazon Instant Video, and has also been released as part of the Warner Archive Collection (on DVD-R)!

Current Rights Holder: Warner Bros. New Line Cinema produced and distributed MY DEMON LOVER back in 1987. In 2008, they merged with Warner, and a mere four years later, this film became part of the Warner Archive Collection.


Blu-ray Wishlist:
I can't possibly be the only person that enjoys this silly romantic creature feature can I? If so, then I guess we're stuck with what is essentially a legal bootleg that lacks any extras. BUT if enough people show interest, then perhaps we can get the WB to give MY DEMON LOVER a nice shiny Blu-ray release! If you're up to the task, start bugging the powers that be: Contact Warner Bros. on Facebook and Twitter, and Warner Archive on Facebook and Twitter as well!