A New Book from The Horror & Sci-Fi Prop Preservation Association is due out in May! 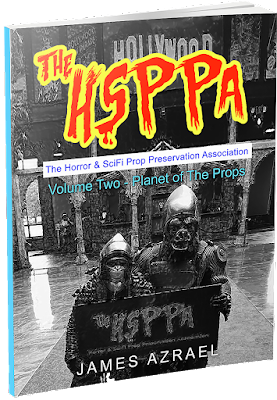 I have to admit Vault Dwellers that until today, I had no idea the Horror & Sci-Fi Prop Preservation Society was a thing. But it truly warms my heart, knowing that that James Azrael and various others are actively preserving film props, and showcasing them around the country! For those of us that don't have the expendable income to visit a convention to see the HSPPA's impressive collection of screen-used props, this book (and the previous volume) are a good way to temporarily fill that void!

About The HSPPA:
The Horror & SciFi Prop Preservation Association (HSPPA) is a nonprofit organization that aims to preserve filmic history by bringing screen-used props and wardrobe from genre movies to public settings for fans to see up close and in person.

While tens of thousands of patrons have seen HSPPA's impressive collection on display at conventions and theaters around the country, not everyone has had the opportunity to experience the exhibition. The upcoming book The HSPPA: Volume Two - Planet of the Props will bring the exhibition to you!

For more info, scope out this video that features an interview with curator James Azrael, and highlights many of the props that make up a small portion of his immense collection!

About the Book:
The 150-page, full-color paperback, signed by author/curator James Azrael, was funded via a successful Kickarter campaign, and the book is already well into production. The book contains high-resolution images of props from the HSPPA collection and featured exhibitors, along with anecdotes about the items.

HALLOWEEN H20, A NIGHTMARE ON ELM STREET 4: THE DREAM MASTER, JASON GOES TO HELL: THE FINAL FRIDAY, JASON X, SILENT HILL, PUNISHER: WAR ZONE, SPAWN, and BATMAN RETURNS are just some of the films from which rare items are on display in the book!

Special guests Christopher Durand (Michael Myers in HALLOWEN H20), Nicholas Vince (Chatterer in HELLRAISER), Nick Benson (special effects artist on A NIGHTMARE ON ELM ST. 4), and Daniel Emery Taylor (actor in THE RETURN OF SWAMP THING) are among those who share props from their collections - and the personal stories that accompany them.

Planet of the Props is set for a May release - stay tuned for the finalized street date if you are interested in procuring a copy of this upcoming book!

Posted by The Vault Master at 1:12 AM