Scream Factory Beams THE PROJECTED MAN into Your Blu-ray Player on January 30th! 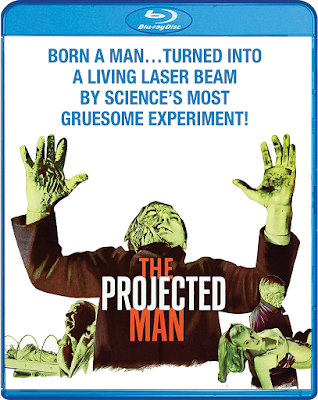 THIS CLASSIC TALE OF A SCIENCE EXPERIMENT GONE HORRIBLY WRONG COMES TO BLU-RAY WITH A NEW 2K TRANSFER AND EXTRAS!

The only time I ever watched this British sci-fi/horror tale was when it was being riffed in an episode of Mystery Science Theater 3000. Though the film lends itself well to the comedic comments of Mike Nelson and his cohorts, I do recall actually enjoying the movie on its own merits. And now that Scream Factory has released it on Blu-ray, I feel compelled to add it to my movie collection, especially since it has been given so much TLC!

Synopsis: "A million volts of death in each of his hands!" Dr. Paul Steiner (Bryant Halliday - TOWER OF EVIL, DEVIL DOLL) and Dr. Christopher Mitchell (Ronald Allen - A NIGHT TO REMEMBER, Doctor Who) have created a projection device that can transmit any object within a few miles of their new device. The device works well on inanimate objects, but using it on a living device causes death. When Steiner is accidentally projected, he becomes a disfigured monster who has the ability to kill by electrification!

Extras:
THE PROJECTED MAN arrives at retailers on Tuesday, January 30th, and will cost in the neighborhood of $20 - $25! You can order yourself a copy at AMAZON, BULLMOOSE, DIABOLIK DVD, or directly from SHOUT! FACTORY if you want it sooner!