The Vestron Video Collector's Series Adds GOTHIC AND CLASS OF 1999 to its Catalog on January 30th! 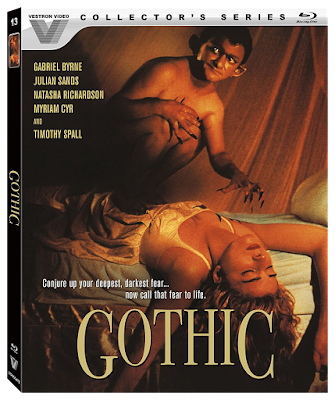 I've been really happy with the Vestron Video Blu-ray label since they kicked things off with BLOOD DINER and CHOPPING MALL. Their latest additions are definitely making me nostalgic: I've never seen GOTHIC, but its cover sure brings back some memories of my neighborhood's old mom & pop video store.

However, I have seen CLASS OF 1999 several times. This bizarre followup to CLASS OF 1984 is cheesy in all the right ways and has an awesome end credits song (Come the Day by Midge Ure)! Though the price of these releases typically scares me away, I do look forward to adding these titles to my growing collection.

GOTHIC Synopsis: 1816. A sprawling villa in Switzerland is the setting for the night of the “Haunted Summer,” when five famous friends gather around an ancient skull to conjure up their darkest fears. Poets Lord Byron and Percy Shelley; Shelley’s fiancée, Mary Godwin; Mary’s stepsister, Claire Clairmont; and Byron’s friend, Dr. John Polidori, spend a hallucinogenic evening confronting their fears in an orgiastic frenzy of shock lunacy that later inspired Mary Shelley to write the classic FRANKENSTEIN and Dr. Polidori to pen THE VAMPYRE, which became the basis for the creation of DRACULA. One fateful evening, two legends were born, in Ken Russell’s GOTHIC.

Extras:
GOTHIC comes to Blu-ray on January 30th as the 13th title in the Vestron Video Collector's Series and will run you about $25 - $30! Order yourself a copy now at AMAZON, BULLMOOSE, or DIABOLIK DVD! 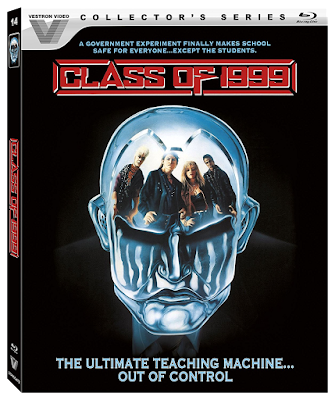 CLASS OF 1999 Synopsis: The time is the future, and youth gang violence is so high that the areas around some schools have become “free fire zones” into which not even the police will venture.

These human-like androids have been programmed to teach and are supplied with weapons to handle discipline problems. These kids will get a lesson in staying alive!


Extras:
CLASS OF 1999 is also due out on Tuesday, January 30th and costs anywhere from $25 - $28! Treat yourself and order a copy from AMAZON, BULLMOOSE, or DIABOLIK DVD!