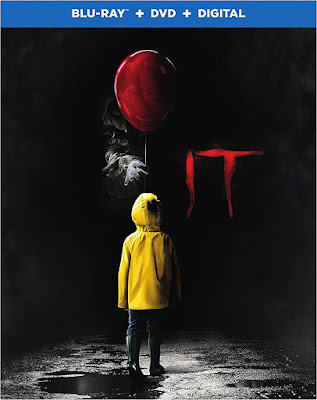 ON JANUARY 9TH, ADD THE SURPRISE HORROR HIT OF 2017 TO YOUR COLLECTION!

2017 was a great year for the Horror genre, especially when the new adaptation of Stephen King's IT became the highest grossing R-Rated fright flick of all time! With its great cast of child actors, and strong advertising campaign, IT was destined to do well. But no one expected this!

And if you loved the movie on the big screen, get excited because you can finally add this to your Stephen King film collection! (Right in between the original "IT" TV mini-series and MAXIMUM OVERDRIVE!)

Synopsis: New Line Cinema's horror thriller IT, directed by Andrés Muschietti (MAMA), is based on the hugely popular Stephen King novel of the same name, which has been terrifying readers for decades. When children begin to disappear in the town of Derry, Maine, a group of young kids are faced with their biggest fears when they square off against an evil clown named Pennywise, whose history of murder and violence dates back for centuries.

Extras:
IT will be available everywhere on Tuesday, January 9th on DVD, Blu-ray, and 4K UHD! Order your copy now from AMAZON or BULLMOOSE! Also be on the lookout for the Best Buy Exclusive IT Steelbook, and a Target exclusive release that has a lenticular cover and "art cards."

Posted by The Vault Master at 4:06 AM