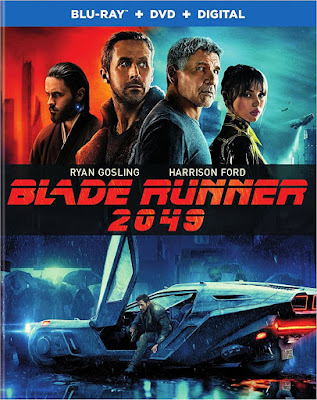 I gotta be honest gang, I was not a big fan of the original BLADE RUNNER. However I think it was because I had certain expectations from the film that weren't met. (I still say the ending is pretty anticlimactic - "It's time to die" indeed!) But now that the sequel is out, I find myself ready to give the original a second look.... but sheesh, what version should I watch?!

Synopsis: Thirty years after the events of the first film, a new blade runner, LAPD Officer K (Ryan Gosling), unearths a long buried secret that has the potential to plunge what’s left of society into chaos. K’s discovery leads him on a quest to find Rick Deckard (Harrison Ford), a former LAPD blade runner who has been missing for three decades.

Extras:
By all accounts, if you are a fan of the original BLADE RUNNER, then you will most likely enjoy this lengthy followup. BLADE RUNNER 2049 will be available on Blu-ray and 4K UHD on Tuesday, January 16th and should cost around $25! Order your copy now from AMAZON or BULLMOOSE!