Freddy Krueger Fans Are Getting Their Own Documentary in Late 2018! 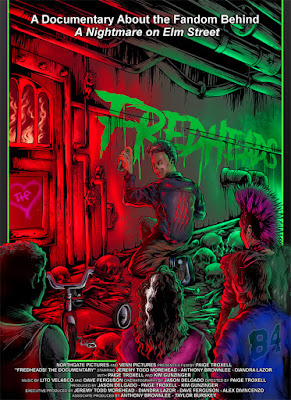 NEW DOCUMENTARY IN THE WORKS  FOCUSES ON THE FANDOM OF THE "NIGHTMARE ON ELM ST." FRANCHISE!

We currently live in an era with an amazing number of documentaries about Horror and cult cinema. And while A NIGHTMARE ON ELM ST. has already gotten a fantastic documentary (NEVER SLEEP AGAIN: THE ELM STREET LEGACY), the upcoming FREDHEADS focuses exclusively on the series' dedicated fandom!

Synopsis: Wes Craven's A NIGHTMARE ON ELM ST. is a global cultural phenomenon that has given eternal life to its legacy and its villain, Freddy Krueger. FREDHEADS is a documentary that shines a spotlight on the fervent fans within the Elm Street community.

This film's central theme analyzes how being a fan can change your life. The filmmakers have been traveling the country to speak with enthusiasts of all types: passionate fanatics, lifelong aficionados, cosplayers, creators, artists, filmmakers, kids, and more.

Additional Info: Venn Pictures and Northgate Pictures have launched an Indiegogo in order to complete production on the ambitious project. (CLICK HERE to visit the crowdfunding page for more details, and to see what perks are being offered.)

This crowdfunding campaign allows fans to pre-order a limited edition DVD of the documentary, ensuring that they will be among the first to see FREDHEADS. T-shirts, pins, posters, soundtracks, and sunglasses are among the available merchandise. One-of-a-kind perks from Elm Street alumni are also up for grabs, including prop replicas signed by Freddy Krueger himself, Robert Englund.

FREDHEADS is directed by Paige Troxell, who credits A NIGHTMARE ON ELM STREET with saving her life. "In my darkest times I have turned to Elm Street. It is a survival story, it is my best friend, it is my comfort, and it is my home," gushes Troxell. "I knew that there were others out there who saw this film for more than just the typical slasher. It is my goal to bring to life each and every story; to show the world that this community stands together, that we are a support team for each other."

The FredHeads team loves to hear from fellow fans, so be sure to visit the film's Facebook page to find out how you can submit your story!

Posted by The Vault Master at 1:19 AM