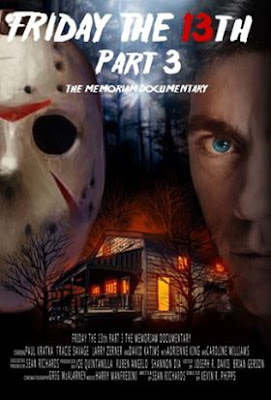 FRIDAY THE 13TH PART 3 - THE MEMORIAM DOCUMENTARY FOCUSES ON RICHARD BROOKER, THE FIRST "JASON" TO DON THE TRADEMARK HOCKEY MASK!

Along with NEVER HIKE ALONE, and the upcoming VOORHEES, fans are clearly keeping the torch burning while the FRIDAY THE 13TH franchise remains on hiatus. (Which could end soon if Jason Blum has his way.) And while we wait for the day that Jason Voorhees returns to the silver screen, you can kill an additional half-an-hour with Kevin R. Phipps' all-new FRIDAY THE 13TH PART 3 - THE MEMORIAM DOCUMENTARY!

Synopsis: Take a look behind the scenes of FRIDAY THE 13TH PART 3D with host, Paul Kratka, in this insightful fan-driven documentary. Featuring untold stories and interviews with several franchise favorites, and never-before-seen location footage and set photography, this documentary is a touching look back on the life of actor Richard Brooker.

This short doc (only 38 minutes!) is hosted by FRIDAY THE 13TH PART 3D co-star Paul Kratka (Rick, aka "The Brawny Paper Towel Guy"). It features some fun anecdotes, and interesting tidbits about Brooker, who sadly passed away from a heart attack back in 2013.

Phipps' doc has interviews with numerous FRIDAY THE 13TH alumni, and reveals some of the hardships faced on the set of the 3D sequel. It is also chock full of fond remembrances of the Emmy Award-Winning(!) Richard Brooker, and reveals the sad fate of the cabin most of us Friday fans know best as "Higgins Haven."

FRIDAY THE 13TH - THE MEMORIAM DOCUMENTARY is absolutely free to watch on YouTube! Make sure you scope it out, and maybe you'll learn yourself a thing or two about one of the best Jason Voorhees performers of all time!