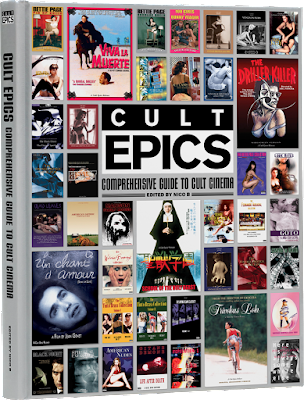 Limited to 1,000 copies, this first edition hardcover from Cult Epics looks, well.... EPIC! Featuring 256 pages filled with 500 color images, this beast of a book shines a spotlight on the obscure, unknown, and little shown. Arthouse films, Horror, and Erotica all have their own place in this gorgeous tome that is dedicated to cult cinema!

Book Signing and Events:
Once again, CULT EPICS: COMPREHENSIVE GUIDE TO CULT CINEMA will be available on Tuesday, February 6th! You can pre-order it now at AMAZON (as well as AMAZON.CA and AMAZON.UK)! Scope out the video below to get a closer look at this beautiful book!