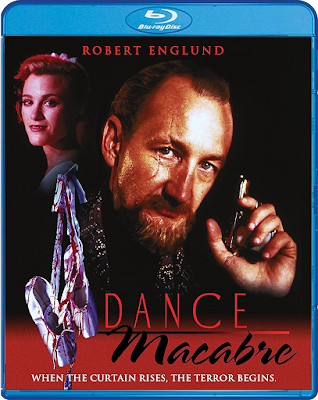 You know, sometimes it is hard to fathom that Robert Englund was in films other than the NIGHTMARE ON ELM STREET franchise! Which brings us to DANCE MACABRE, a film that was originally intended as a sequel to 1989's PHANTOM OF THE OPERA (which starred Englund as the titular character).

I've never seen this movie before, but it seems like it takes some inspiration from SUSPIRIA? I guess I'll found out soon enough once it is out on Blu-ray!

Synopsis: Horror icon Robert Englund is back in another chilling tale of horror! Michelle Zeitlin stars as Jessica, an American ballerina who reluctantly enrolls in a Russian dance academy, where she meets the charismatic choreographer Anthony (Englund). A dead ringer for his long dead lover, Jessica becomes Anthony's favorite student – and his personal obsession. But what should be the chance of a lifetime for Jessica becomes a living nightmare, as each of her fellow dances is brutally murdered.

Please note: Due to an unforeseen issue with the only existing HD master of this film, there was a brief 10-second clip that had to be replaced with an upconverted SD source. We apologize for the abnormality, but in the interest of getting this cult classic out to the fans, we decided to release it with this fix and not cut this portion out of the film

Extras:
DANCE MACABRE will be released on Tuesday, January 23rd wherever Blu-ray discs are sold and should cost anywhere from $18 - $25! Order your copy now from AMAZON, BULLMOOSE, DIABOLIK DVD, or directly from SHOUT! FACTORY to get it early!