Blumhouse Productions Invites You to Play TRUTH OR DARE on April 27th! 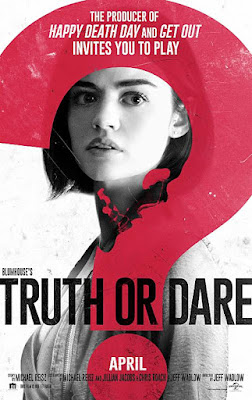 Having watched the trailer for TRUTH OR DARE, it sort of feels like something akin to IT FOLLOWS, in that a curse is passed to a group of unsuspecting teens. The big difference though is that the supernatural villain in this film isn't out to literally screw them!

Blumhouse has been on fire lately with their ongoing INSIDIOUS and THE PURGE series, plus really solid genre efforts like GET OUT, HAPPY DEATH DAY, and SPLIT! TRUTH OR DARE could very well be the start of yet another successful franchise for them, but we'll have to wait until late April to find out!

Synopsis: Lucy Hale (Pretty Little Liars) and Tyler Posey (Teen Wolf) lead the cast of TRUTH OR DARE, a supernatural thriller from Blumhouse Productions. A harmless game of "Truth or Dare" among friends turns deadly when someone, or something, begins to punish those who tell a lie-or refuse the dare.

Look for TRUTH OR DARE in theaters nationwide on Friday, Aril 27th!