On January 30th, Get Reacquainted with Wes Craven's Classic THE HILLS HAVE EYES! 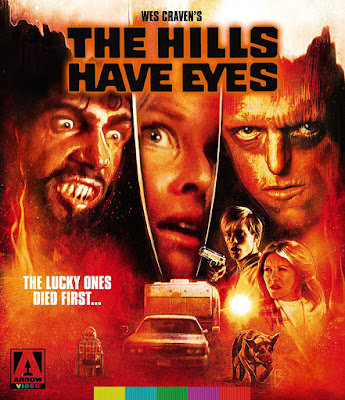 FOR THOSE OF YOU LOOKING FOR A CHEAPER ALTERNATIVE TO ARROW'S PREVIOUS RELEASE OF "THE HILLS HAVE EYES," YOUR WAIT IS OVER!

Arrow Video has previously released a Limited Edition Blu-ray of THE HILLS HAVE EYES, which comes with six postcards, a reversible fold-out poster, and a collectible booklet about the film. While this Special Edition lacks those bells and whistles, it still has everything else that makes this a very worthwhile purchase.

Synopsis: THE LUCKY ONES DIED FIRST... Horror master Wes Craven achieved critical and commercial success with the likes of SCREAM and A NIGHTMARE ON ELM STREET, but for many genre fans, the director s seminal 1977 effort THE HILLS HAVE EYES remains his masterpiece.

Taking a detour whilst on route to Los Angeles, the Carter family run into trouble when their campervan breaks down in the middle of the desert. Stranded, the family find themselves at the mercy of a group of monstrous cannibals lurking in the surrounding hills. With their lives under threat, the Carters are forced to fight back by any means necessary.

As grueling a viewing experience today as it was upon initial release, THE HILLS HAVE EYES stands alongside the likes of THE TEXAS CHAINSAW MASSACRE and NIGHT OF THE LIVING DEAD as one of the defining moments in American horror cinema.

Extras:
Arrow's Special Edition of THE HILLS HAVE EYES will be available everywhere on Tuesday, January 30th and should cost between $22 and $25! You can order your copy right now from AMAZON, BULLMOOSE, or DIABOLIK DVD!