On January 16th, Shout Select Will Show You What Happens When You Cross the MACON COUNTY LINE! 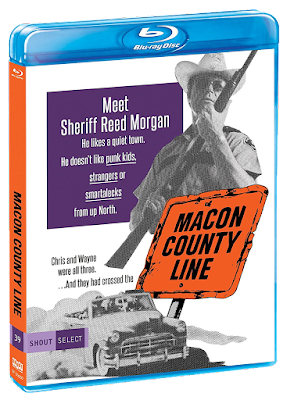 MACON COUNTY LINE is yet another movie that I just haven't gotten around to watching. But now that it's being released by Shout Select, the time may have finally come to experience this film for the first time! With an HD transfer, plus new and vintage special features, this seems like a disc worth owning, whether you're a fan of this cult classic, or a Macon County virgin like myself!

Synopsis: Louisiana, 1954: Brothers Chris & Wayne Dixon (Alan Vint and Jesse Vint) are joyriding through the South before enlisting in the Army. When the wife of a local Sheriff is brutally killed by a pair of psychotic drifters, Chris and Wayne are mistaken for the murderers. Far from home, on the run and out of time, they find themselves hunted by the crazed lawman in a tragedy of rage and revenge that explodes in a shocking climax ... once they cross the MACON COUNTY LINE.

Best known for playing goofy Jethro Bodine on The Beverly Hillbillies, Max Baer forever changed his image by producing, co-writing and co-starring in this powerful movie. With a strong supporting cast that includes Joan Blackman, Geoffrey Lewis, Cheryl Waters, James Gammon, Doodles Weaver and Leif Garrett, Macon County Line became the hit of 1974 as well as one of the most acclaimed drive-in classics of all time!

Extras:
MACON COUNTY LINE is available at most retailers on January 16th, and depending on where you shop, it'll run you about $15 - $20. Order your copy now from AMAZON, BULLMOOSE, DIABOLIK DVD, or directly from SHOUT! FACTORY.