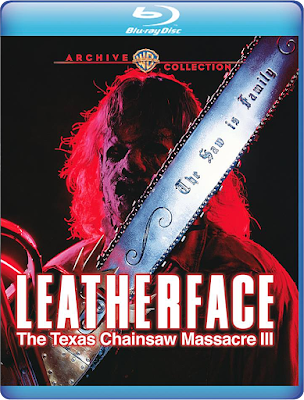 Over the years I've found myself growing fonder of Tobe Hooper's original TEXAS CHAINSAW MASSACRE and its tonally different followup, THE TEXAS CHAINSAW MASSACRE PART 2! But prior to my change of heart, I had always been a fan of Jeff Burr's third entry into the franchise. And now the day I've been waiting for is almost here, as Warner Archive Collection is finally unleashing TCM III on Blu-ray, uncut, in HD, with cool special features!

Synopsis: Two college students driving coast to coast (Kate Hodge - RAPID FIRE, THE HIDDEN II and William Butler - GHOULIES II, FRIDAY THE 13TH PART VII: THE NEW BLOOD) are lured off the main highway and onto a deserted Texas road. Here they are stalked by the menacing Leatherface (R.A. Mihailoff - PUMPKINHEAD II: BLOOD WINGS, HATCHET II) and his demented family… a bizarre cannibalistic clan with blood on their hands and a feast on their minds.

The students’ only chance for escape is a survivalist (Ken Foree - DAWN OF THE DEAD, THE DEVIL'S REJECTS) with enough firepower to blast Leatherface and the rest of the grisly predators to hell. A depraved shocker of intense terror from the gruesome beginning to the bloody finish.

LEATHERFACE: THE TEXAS CHAINSAW MASSACRE III makes its triumphant Blu-ray debut on Tuesday, February 13th! You can order yourself a copy (or buy it for that special someone for Valentine's Day) now at AMAZON, BULLMOOSE, DIABOLIK DVD, or directly from THE WB SHOP.