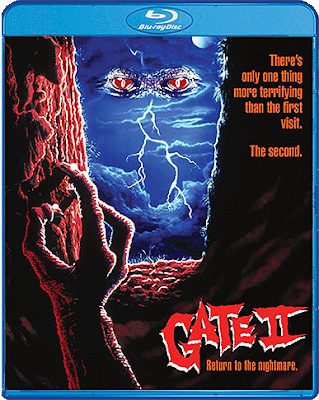 SCREAM FACTORY REOPENS THE GATE, WITH THEIR DEFINITIVE RELEASE OF THIS LONG OUT OF PRINT SEQUEL!

I absolutely love Tibor Takacs' THE GATE. It was one of the first Horror films I saw growing up, and I'm happy to say that it still holds up remarkably well after all these years! And the Vestron Collector's Series Blu-ray release for it is a must-have!

I haven't seen GATE II in a very long time, but if memory serves, I wasn't a huge fan of it. However, time sometimes changes one's perspective, so I'll have to pick this Scream Factory release up at some point and revisit it!

Synopsis: Not all minions are cute and cuddly … This supercharged sequel to the horror classic THE GATE comes alive with unearthly creatures, heart-stopping action, and incredible special effects.

GATE II picks up again with Terry (Louis Tripp), the teenage sorcerer who summons beings from the other side whose powers can be used to grant any wish. Unfortunately, before the Gate closes again, a "minion" – a tiny disciple of Satan himself – manages to slip through to our dimension. When the creature is kidnapped – all hell breaks loose!

Directed by Tibor Takacs (THE GATE, I, MADMAN, Sabrina the Teenage Witch), GATE II is based on characters created by Michael Nankin (Battlestar Galactica, Hell on Wheels), and stars Louis Tripp (THE GATE) and Pamela Segall (King of the Hill, Californication).

Extras:
Scream Factory apparently went all out for this release, so fans of THE GATE flicks will definitely want to add this Blu-ray to their collections! GATE II's street date is February 27th, and should cost between $20 and $25! You can order your copy now from AMAZON, BULLMOOSE, DIABOLIK DVD, or directly from SHOUT! FACTORY to get it two weeks early!

Posted by The Vault Master at 2:52 AM