EMANUELLE IN AMERICA Arrives on Blu-ray on November 12th, Totally Uncut and Remastered in 4K! 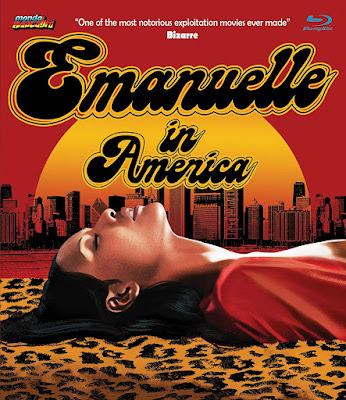 Originally only available on DVD from Blue Underground, EMANUELLE IN AMERICA finally arrives on Blu-ray disc, courtesy of Mondo Macabro. The film is fully uncut, and has been given a new 4K remaster! Admittedly, this isn't anything I'd personally add to my collection, mostly because it's a Joe D'Amato film (but also because horse-jacking and fake snuff films aren't my bag) but if you're a Laura Gemser fan, you'll definitely want to pick up this release of EMANUELLE IN AMERICA!

Armed with her striking feature, unique sensual talents - and a hidden camera - she's off… examining life as a love slave at a ranch run by a sadistic brothel master, investigating a bizarre spa for super rich sexually frustrated women, exploring the kinky side of a straight laced Republican politician, and finally uncovering shocking evidence of an international snuff film conspiracy.

Now for the first time ever on Blu-ray, this notorious and truly shocking film can be seen in all its high definition glory, totally uncut. Infamous director Joe d'Amato pulls out all the stops in this epic of sleaze and depravity. It's Emanuelle… but as you've never seen her before!

Extras:
Mondo Macabro's Blu-ray of EMANUELLE IN AMERICA is due out on Tuesday, November 12th and should be available wherever Blu-ray discs are sold! This disc will cost between $18 - $20, and can be obtained from AMAZON, BULL MOOSE, DIABOLIK DVD, or directly from MONDO MACABRO's online store!