Severin Films Wants You to Meet GWENDOLINE and THE BOYS NEXT DOOR! 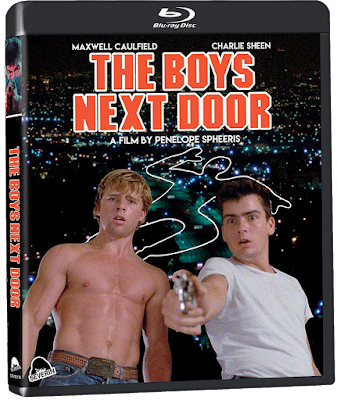 A TEENAGE CRIME SPREE AND A SEXY ADVENTURE IN THE LAND OF YIK YAK AWAIT YOU IN SEVERIN FILMS' TWO NEWEST BLU-RAY RELEASES!

Few labels have kept me on my toes as much as Severin Films has! While Scream Factory, Arrow Video, and Kino have been cranking out a lot of quality stuff, Severin has been comfortably occupying their own niche with a steady stream of exploitation titles from around the world! Speaking of which, Severin Films just dropped two new titles onto Blu-ray disc today: Penelope Spheeris' THE BOYS NEXT DOOR, which features Maxwell Caulfield and Charlie Sheen as rampaging teens, and GWENDOLINE, an adventure film filled to the brim with topless women, including Tawny Kitaen and Zabou Breitman! Both films have been remastered in 4K, and include lots of extras - to get all the details continue onward!

Synopsis: This is the moment '80s teen movies turned "harrowing" (Unobtanium13.com), "frightening" (FilmFracture.com) and "all too real" (CoolAssCinema.com). Now this "dark, forbidding vision" (Los Angeles Times) from Penelope Spheeris – director of THE DECLINE OF WESTERN CIVILIZATION Trilogy as well as WAYNE'S WORLD – and screenwriters Glen Morgan & James Wong – creators of FINAL DESTINATION and writers/producers of THE X-FILES – comes to Blu-ray for the first time ever: Maxwell Caulfield and Charlie Sheen star as high-school outcasts who head to Los Angeles for a spree of petty crime, senseless violence and savage murder "that will stick in your head for a long time" (The-Unknown-Movies.com). Patti D'Arbanville (BILITIS) and Christopher McDonald (REQUIEM FOR A DREAM) co-star in this "descent into Hell" (BirthMoviesDeath.com) featuring music by Iggy Pop, Tex & The Horseheads and The Cramps!

Extras:
I've never even heard of this movie before Vault Dwellers, but it sounds fairly interesting! If you are as intrigued as I am about the murderous adventures of young Charlie Sheen, you're in luck because THE BOYS NEXT DOOR is now available wherever Blu-rays are sold! This disc should cost between $20 - $24 and is readily available from AMAZON, BULL MOOSE, DIABOLIK DVD, or directly from SEVERIN FILMS! 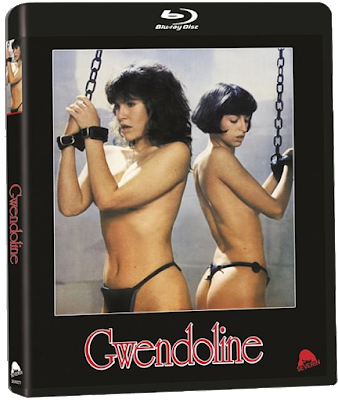 Synopsis: In the '70s, he created a daring new world of X-rated cinema with EMMANUELLE and THE STORY OF O. And in 1984, Just Jaeckin wrote and directed the most ambitious, audacious, fun – and final – classic of his legendary erotic career: Video vixen Tawny Kitaen (BACHELOR PARTY, WITCHBOARD) and action hero Brent Huff (NINE DEATHS OF THE NINJA, STRIKE COMMANDO 2) star in this "★★★★ kink-o-rama" (Mr. Skin) based on the infamous S&M comic strip and bursting with perilous adventure, bountiful nudity, spectacular production design, and eye-popping lesbian bondage! César Award winning actress/director Zabou co-stars in the "decadent delight and true cult favorite" (WhatCulture.com) that launched Severin Films! 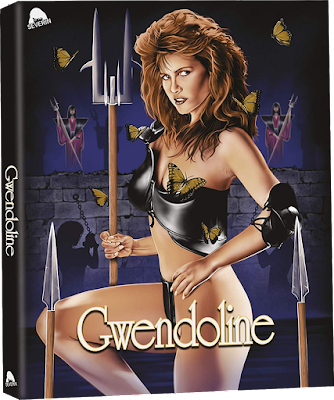 Extras:
Limited Edition Exclusives:
I recall reading all about GWENDOLINE over at BadMovies.Org well over a decade ago and I honestly never thought I'd see the day where it would get a Blu-ray release! For those of you ready to feast your eyes upon Tawny Kitaen's ahm... acting abilities in startling HD clarity, Severin's standard and limited editions of GWENDOLINE are now available!

For fans (or collectors who enjoy having bragging rights) Severin also has various bundles available in their online store including copies of the Limited Edition that come with enamel pins, t-shirts, and/or autographs from Tawny Kitaen and Brent Huff! CLICK HERE to take a peek at the GWENDOLINE goodness on Severin's site! 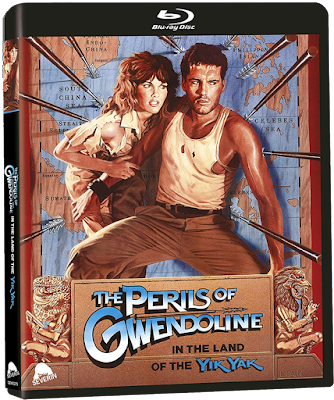 Posted by The Vault Master at 2:19 AM