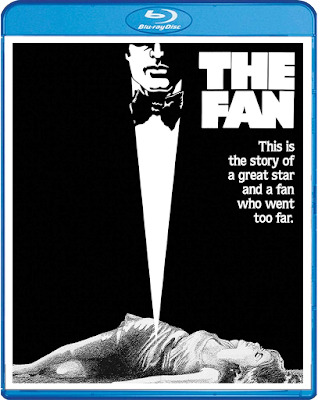 SCREAM FACTORY BRINGS THIS OFT-OVERLOOKED SLASHER FILM TO BLU-RAY FOR THE FIRST TIME EVER!

While THE FAN's subject matter isn't entirely new (I've seen multiple movies where a crazed fan stalks a celebrity), the cast of THE FAN pretty much sold me on this film! Pre-TERMINATOR Michael Biehn plays the titular obsessed fan that stalks Lauren Bacall - both star alongside James Garner, Maureen Stapleton, and Hector Elizondo! THE FAN hails from Paramount's vaults, so one really has to wonder what other treasures will be unearthed by Scream Factory in 2020! (Here's hoping for BUG, ORCA, THE EXPLORERS, STEPHEN KING'S GRAVEYARD SHIFT, and/or the 1976 KING KONG!) Until then, let's take a closer look at this upcoming release!

Synopsis: "He is Sally Ross' greatest fan ... and greatest nightmare." Hollywood legend Lauren Bacall (THE BIG SLEEP) and Michael Biehn (ALIENS, TOMBSTONE) tear up the screen in the edge-of-your-seat thriller, The Fan. Sally Ross (Bacall) is a renowned Broadway star, glamorous celebrity, and the object of adoration of countless admirers.

But among all the loving little people lurks a young man (Biehn) whose devotion teeters on the edge of madness. His impassioned letters to her are initially a source of pleasure, but as he attempts to realize his ultimate fantasy – and is met with rejection – the stakes are raised to terrifying heights ... which might bring on the final curtain for Sally.

Extras:
THE FAN was initially a flop when it was released in theaters in May of 1981 (some believe this was due in part to John Lennon's murder by Beatles fan Mark David Chapman) and has been out of print since the early 2000's! But perhaps now, after nearly forty years, Edward Bianchi's film will finally find its audience! THE FAN arrives on Blu-ray on Tuesday, November 19th, and should cost between $24 - $26! Order a copy now from AMAZON, BULL MOOSE, DIABOLIK DVD, or directly from SHOUT! FACTORY.