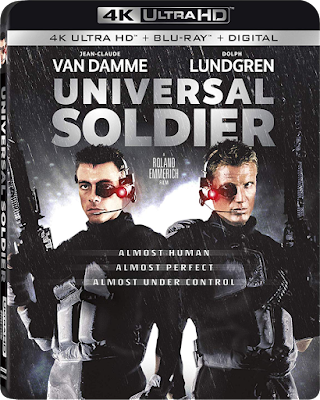 I like UNIVERSAL SOLDIER well enough (the pairing of JCVD and Dolph Lundgren was a brilliant strategy) but (Van) damn it... the resulting franchise is all over the place! There are currently three direct sequels (THE RETURN, REGENERATION, and DAY OF RECKONING), and two numbered sequels that were made for TV (BROTHERS IN ARMS and UNFINISHED BUSINESS), plus a remake is apparently in the works.

All of that madness aside, while I haven't seen it recently, I recall enjoying the original UNIVERSAL SOLDIER, and look forward to seeing it in a much higher resolution than the DVD copy I own. If you're a fan of this film and don't own it yet, or are the type that always needs the best possible version of the favorite movies in your collection (guilty as charged!), then this is be a must-own for you!

Synopsis: Soldiers Luc Deveraux (Jean-Claude Van Damme - BLOODSPORT, KICKBOXER, STREET FIGHTER: THE MOVIE) and Sgt. Andrew Scott (Dolph Lundgren - ROCKY IV, THE PUNISHER, RED SCORPION) killed each other in Vietnam. But their demise proves to be just the beginning for the U.S. government, which brings both men back to life decades later for a secret anti-terrorism program.

Extras:
Lionsgate's 4K Ultra HD release of UNIVERSAL SOLDIER ports over the extras from the previous Blu-ray release, but boasts superior picture and sound! Is it worth the upgrade? Well that's entirely up to you! This disc is currently available wherever movies are sold and should cost between $16 - $18! Get your copy now from AMAZON or BULL MOOSE!