On November 5th, Lionsgate Gives you Some SCARY STORIES TO TELL IN THE DARK! 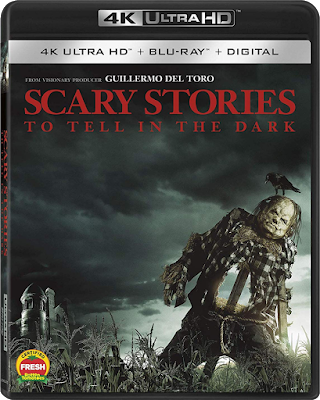 When I was much younger, I repeatedly read the trio of Scary Stories to Tell in the Dark books cover to cover. The funny thing is that I don't recall much about the stories themselves, other than most weren't all that scary. What I do recall vividly was the amazing, and often disturbing artwork created by Stephen Gammell which has been brought to life on the silver screen thanks to the efforts of Guillermo del Toro and director André Øvredal. I missed out on seeing SCARY MOVIES TO TELL IN THE DARK during its theatrical run, but thankfully it arrives on all home video formats on November 5th! I feel like releasing this film after Halloween is a bit of a missed opportunity, but better late than never right?

Synopsis: It’s 1968 in America. Change is blowing in the wind…but seemingly far removed from the unrest in the cities is the small town of Mill Valley, where for generations the shadow of the Bellows family has loomed large. It is in their mansion on the edge of town that Sarah, a young girl with horrible secrets, turned her tortured life into a series of scary stories, written in a book that has transcended time. Stories that have a way of becoming all too real for a group of teenagers who discover Sarah's terrifying tome!