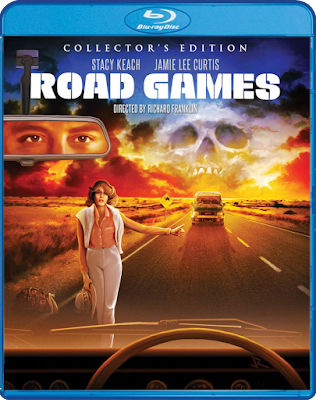 ROAD GAMES is a title that's been on my radar for some time now. Directed by the late Richard Franklin (PATRICK, LINK, PSYCHO II), the film stars Stacy Keach (THE NINTH CONFIGURATION, CLASS OF 1999, MOUNTAIN OF THE CANNIBAL GOD) and Jamie Lee Curtis (who was at the tail end of her early "scream queen" days) who both end up playing a game of cat and mouse with a psychotic killer!

Though it is already available on Region Free Blu-ray from Umbrella Entertainment, the Scream Factory release of ROAD GAMES (which likely uses the same 4K remaster) has way more special features! When I finally add this to my collection, I'm definitely going with the Scream Factory disc!

Synopsis: Stacy Keach is Pat Quid, a lone trucker who plays games to keep his sanity on long hauls through the desolate Australian Outback. Jamie Lee Curtis is a free-spirited hitchhiker looking for excitement with a game of her own. And somewhere up ahead is a maniac in a van whose game may be butchering young women along the highway. But when the killer decides to raise the stakes, Quid's game becomes personal ... and the rules of this road are about to take some very deadly turns.

Director Richard Franklin packs plenty of Hitchcock-like twists and suspense into this sly shocker that was nominated for four Australian Film Institute Awards and remains one of the most surprising thrillers of the '80s.

Extras:
As you can see, Scream Factory's upcoming Collector's Edition Blu-ray of ROAD GAMES is absolutely packed with cool extras, both new and old! That alone is entirely worth this disc's current cost, which should be between $24 - $29! Get yourself a copy of ROAD GAMES today from AMAZON, BULL MOOSE, DIABOLIK DVD, or directly from SHOUT! FACTORY, which will net you an exclusive 18 x 24 poster (while supplies last)!