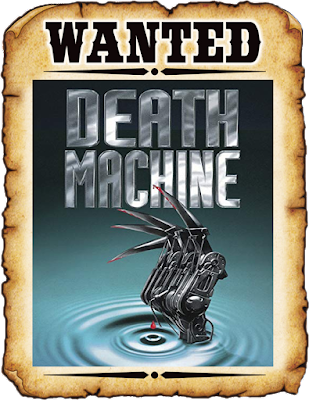 Between 1985 - 1992, a young effects artist named Stephen Norrington was making a name for himself while working on creature & makeup effects on numerous films, including YOUNG SHERLOCK HOLMES, LIFEFORCE, THE WITCHES, ALIENS, HARDWARE, SPLIT SECOND, WAXWORK 2: LOST IN TIME, and ALIEN 3! That's one hell of a résumé, right?

After cutting his teeth as a director on 1994's DEATH MACHINE (more on that later!), Stephen went on to direct BLADE for New Line Cinema in 1998. The success of that film was followed by another project he wrote and directed (THE LAST MINUTE, which seems oddly prophetic in retrospect), and it seemed like he was destined for bigger and better things! Then in 2003 it happened: Stephen Norrington's directing career ground to a halt thanks to a little movie called THE LEAGUE OF EXTRAORDINARY GENTLEMEN.

This production was nothing short of a perfect storm of awfulness: Stephen was saddled with a disgruntled Sean Connery (who was by all accounts, openly disdainful of Norrington on the set), experienced frequent studio interference (the Fox execs decided the movie needed hit theaters in the Summer, rather than its intended Fall release), and, in mid-production, he had to search for a new special effects shop to work on the film! So it came as no surprise that Norrington quit directing soon after. As for the film itself, it was a moderate commercial success but was savaged by critics, disowned by Alan Moore (no shock there), and the focus of a plagiarism lawsuit between 20th Century Fox and.... LARRY COHEN?! (Yup! True story!)

Since the entire LEAGUE incident Norrington's done some effects work (most recently in HARBINGER DOWN), but has yet to return to the director's chair even though he's been attached to several projects including THE CROW reboot and THE LOST PATROL (which are both apparently mired in development hell). Personally I think Stephen Norrington got a raw deal, and I continue to patiently await his return to filmmaking. But until that day arrives, lets take a look back to 1995 when DEATH MACHINE was released, and Stephen's future as a director was so bright he had to wear shades!
Synopsis: In the not too distant future, a mega-corporation called Chaank Armaments is working on "The Hardman Project," a weapons system that is supposed to turn average troops into cybernetic super soldiers! But when a test subject goes on a killing spree and murders a bunch of civilians, there is (unsurprisingly) a large public outcry. In steps Hayden Cale (Ely Pouget), the new CEO of Chaank, who wants to provide transparency to the public and shut down the project. She's met with stiff resistance from the board of directors and the Hardman Project's unhinged weapons designer Jack Dante (Brad Dourif). Shortly after Cale terminates Dante's employment with the company and locks down Vault 10 (where his latest secret invention is housed), things quickly spiral out of control.

A trio of "eco-warriors" (named Sam Raimi, Weyland, and Yutani) break into the building with the intention of hacking/bankrupting Chaank, but end up getting tricked into cutting open the mysterious Vault 10, thus unleashing Dante's mechanical monster called The Frontline Morale Destroyer (aka The Warbeast). The technological terror immediately begins hunting for targets (by "sensing" their fear) and mauls anyone unlucky enough to be caught in its path. With Dante holding all the cards, the would-be eco-terrorists and Cale must find a way out of the locked-down building, or discover a way to defeat the dreaded Warbeast that is running amok!

DEATH MACHINE was written and directed by Stephen Norrington and is, essentially, a well-funded and ambitious fan film. The Warbeast has a passing resemblance to the Xenomorphs Norrington helped create in ALIENS and ALIEN 3, plus many of the characters are named after directors (e.g. Carpenter, Raimi, Dante) or inspired by the ALIEN films (e.g. "Scott Ridley," Weyland, and Yutani). Not surprisingly, the effects are fairly well done (the Warbeast is a brilliantly nasty piece of work!) and Dourif steals the show as Jack Dante (a role that got him nominated for best actor at the 1995 Sitges Film Festival)!

I missed out on this movie back in the 90s (when it was released to VHS) but saw it years later (either on cable or DVD) and it immediately won me over! Sadly, DEATH MACHINE has been out of print (in the U.S.) since 2004, and much like its writer/director, is overdue for a comeback! Here's hoping to see a Region A Blu-ray release in 2020!

Availability: As is the case with the vast majority of titles I choose for this column, DEATH MACHINE is currently out of print. That being said, you can order new or used DVDs of the film from third party sellers on AMAZON and rent or buy DEATH MACHINE via Prime Video.

But for those of you who don't mind spending a little extra coin, you can obtain the Region Free German Blu-ray of DEATH MACHINE. This release comes in standard and limited editions: Both have the uncut version of the film, trailers, and an easter egg (i.e. a hidden featurette). The limited (to 3,000) edition is a three-disc set housed in a beautiful Digi-pack case with new artwork, and comes with both a Blu-ray and DVD copy of the film, plus a soundtrack CD!

You can pick up the standard release from AMAZON.DE or from DIABOLIK DVD! (Update: This disc is currently list as out of stock!) The Limited Edition is a bit harder to track down, but it appears that DIABOLIK DVD still has some in stock!

Current Rights Holder: In Germany, Turbine Media has the distribution rights for DEATH MACHINE. Here in the States? Well.... DEATH MACHINE was released theatrically in 1995 by Trimark Pictures, and later on VHS by their now defunct Vidmark label. The DVD released in February of 2004 beared the Trimark logo as well, even though the company had already merged into Lionsgate in 2001. Therefore, one has to assume that Lionsgate currently has the North American rights to this film which means it could end up as part of the Vestron Collector's Series down the road!


Blu-ray Wishlist:
Next year marks the 25th anniversary of DEATH MACHINE's theatrical release so a North American Blu-ray could hopefully be on the horizon! And while we can own Stephen Norrington's directorial debut on Blu-ray thanks to the efforts of Turbine Media, I would still very much prefer a release specific to our region of the globe, especially if it is loaded with extras! And when that day finally arrives, you can be sure that I will shout it out from the top of the highest (digital) mountain!