Scream Factory Delivers the Goods With Their New Blu-rays of DRACULA (1979) and PROPHECY (1979)! 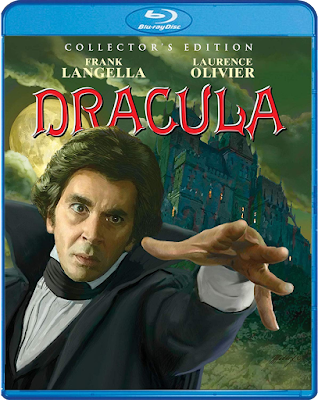 I reported on the previous Blu-ray release of DRACULA, but still haven't seen "Langella Drac" in all of his majesty. But I absolutely want to, especially now that Scream Factory has gone the extra mile and (quite possibly) created the definitive Blu-ray release of John Badham's film! (Plus that cover art by Mark Maddox is just absolutely gorgeous!) PROPHECY on the other hand is a movie I'm very familiar with, and totally adore! In fact, you may recall that it was previously featured on this very site as part of our WANTED ON BLU-RAY column back in January of this year! (I'm not saying there's a correlation there but... I think I can take a tiny bit of credit for this Blu-ray's existence.) Both films arrive on Blu-ray on Tuesday, November 26th and are loaded up with new special features! Read on Vault Dwellers to get all of the juicy details!

Synopsis: Throughout history, Dracula has filled the hearts of men with fear and the hearts of women with desire. In this stylish production of Bram Stoker's classic gothic horror tale, Frank Langella reprises his electrifying, award-winning stage performance as the bloodthirsty Count Dracula as he goes in search of his ultimate bride. Meanwhile, the renowned and relentless vampire hunter, Professor Van Helsing (Sir Laurence Olivier - CLASH OF THE TITANS), seeks to end the dark prince's reign of terror over the citizens of Transylvania. Directed by John Badham (SATURDAY NIGHT FEVER, BLUE THUNDER), featuring an all-star cast and a superbly atmospheric score by the great John Williams, DRACULA (1979) is an unforgettable adaption of one of the most enduring horror legends of all time.

DISC TWO (ORIGINAL THEATRICAL COLOR TIMING)
Wow! This two-disc set offers up quite a bit: A new 4K Scan of the original theatrical version, two different presentations of the film, loads of new cast & crew interviews, and a new audio commentary! Scream Factory's Collector's Edition Blu-ray of DRACULA (1979) arrives on Tuesday, November 26th and should cost between $25 - $28! Order a copy ASAP from AMAZON, BULL MOOSE, DIABOLIK DVD, or directly from SHOUT! FACTORY, which will also net you an 18 x 24 poster featuring Mark Maddox's cover art (while supplies last of course)! 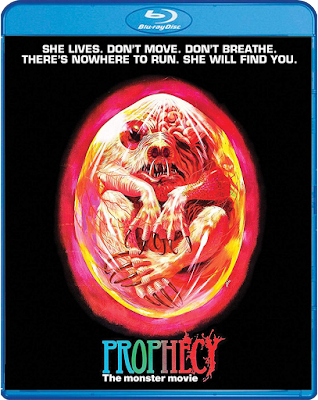 Synopsis: Robert Foxworth (DAMIEN: OMEN II) and Talia Shire (The ROCKY series, THE GODFATHER) star as a doctor and his wife who travel to Maine to research the impact of the lumber industry on the local environment. They begin to investigate a succession of mysterious and terrifying events: ecological freaks of nature and a series of bizarre and grisly human deaths.

Something unimaginably horrible waits in the woods ... something unwittingly created by man, that will become an uncontrollable, merciless machine of destruction. Veteran director John Frankenheimer (THE ISLAND OF DR. MOREAU) presents "a gritty, violent, and deadly film that [packs] a death punch with very vivid, nightmarish special effects..."

Extras:
On November 26th, one of my dreams finally becomes a reality when John Frankenheimer's PROPHECY is officially released on Blu-ray! While I'm extremely happy at the number of interviews included on this disc, I admit that I'm a tad disappointed that it lacks any deleted/extended scenes or a Lee Gambin commentary! That being said, this is a day one purchase for yours truly, and if you've read this far, likely is for you as well! PROPHECY should cost between $24 - $25, and is readily available to order from AMAZON, BULL MOOSE, DIABOLIK DVD, or directly from SHOUT! FACTORY.

Posted by The Vault Master at 2:47 AM