Now Available on Blu-ray: THE BLOB (COLLECTOR'S EDITION) and THE DEVIL RIDES OUT! 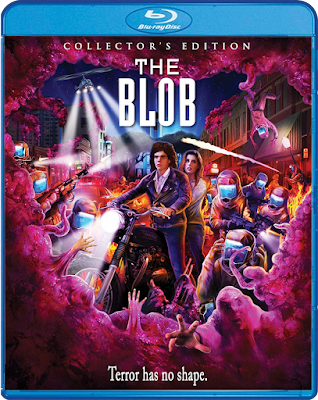 Chuck Russell's THE BLOB is one of my all-time favorite Horror movies, and one of the greatest remakes of all time! It properly updates the lighthearted 1958 original, and offers up some of the most wonderfully slimy deaths ever filmed! (That sink scene is still crazy awesome!) THE DEVIL RIDES OUT is a film I've been meaning to see for some time. It's a Hammer Horror classic directed by Terence Fisher (DRACULA: PRINCE OF DARKNESS, FRANKENSTEIN MUST BE DESTROYED), and starring Christopher Lee (SCARS OF DRACULA, SATANIC RITES OF DRACULA, TASTE THE BLOOD OF DRACULA) so needless to say, it's a guaranteed must-own! Let's take a closer leak at both of these discs Vault Dwellers!

Synopsis: THE BLOB is back in this horrific tale about a vile, malignant life-form that crashes to Earth in a cozy, rural American town called Arborville. Untroubled by conscience or intellect, the Blob does only one thing – and it does it well. It eats anything and everything that moves: men, women, and children. And tonight it wants to swallow the town of Arborville. The original version of THE BLOB thrilled and terrified audiences back in the 1950s. Now the oozing, gooey killer is back with a whole new high-tech look. What was once only suggested now comes to life with state-of-the-art special effects in the tradition of such thrilling remakes as THE THING and THE FLY.

Extras:
Scream Factory's Collector's Edition of THE BLOB is now available wherever Blu-rays are sold and costs between $25 - $29! You can order yourself a copy of this extras-filled disc now from AMAZON, BULL MOOSE, DIABOLIK DVD, or directly from SHOUT! FACTORY. 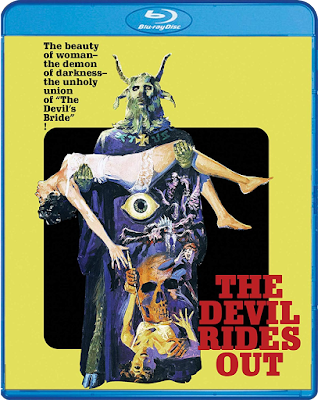 Synopsis: All the demons of hell summoned to earth to claim "The Devil's Bride!"

The debonair Duc de Richleau has been entrusted with the care of his deceased friend's son, Simon Aron. The Duc discovers that the young man has been seduced into joining a satanic cult headed by the diabolic Mocata, who is intent on making Simon one of the Devil's disciples. Having rescued Simon from a bloodied ritual, de Richleau is pursued by Mocata, who will stop at nothing to destroy the Duc and his friends, even summoning the Angel of Death itself.

Starring Christopher Lee in one of his personal favorite roles and based on the celebrated novel by Dennis Wheatley, THE DEVIL RIDES OUT is one of Hammer's most accomplished and thrilling mystery horrors.

Extras:
Scream Factory's release of THE DEVIL RIDES OUT is (comparatively) the best release of this particular title you can get on planet Earth! This Hammer classic is now available and should cost approximately $23! Order a copy today from AMAZON, BULL MOOSE, DIABOLIK DVD, or directly from SHOUT! FACTORY.