Scream Factory Proves That AMBITION Can Kill You, on November 5th! 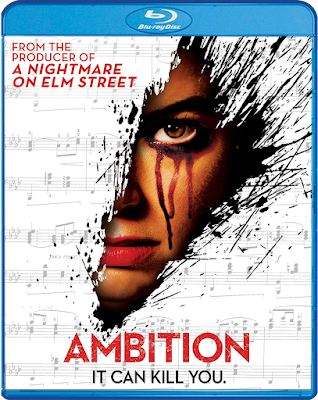 ROBERT SHAYE TRIES HIS HAND AT DIRECTING AFTER A 12-YEAR ABSENCE WITH THIS AMBITIOUS NEW THRILLER!

Though it seems to be getting a lot of negative reviews, I am super curious about AMBITION, if only because of who directed it. This is the third feature film that Robert (brother of Lin) Shaye has directed in his entire career (the last one being 2007's THE LAST MIMZY). Why is this a big deal? Because Shaye started up New Line Cinema, and produced some incredible films over his lengthy career like ALONE IN THE DARK, the entirety of the NIGHTMARE ON ELM STREET franchise, Peter Jackson's LORD OF THE RINGS TRILOGY, XTRO, THE HIDDEN, the first two CRITTERS films, and more! Needless to say, I want to see if his savvy as a producer translates over to his ability as a director!

Synopsis: From Robert Shaye, the producer of A NIGHTMARE ON ELM STREET, comes a deviously engrossing thriller that will keep you guessing – and squirming – to the final frame!

Jude is an intense, driven musician preparing for the biggest performance of her life ... but in her competitive world, her ambition could end up literally killing her. As her competitors begin to die in bizarre ways, she recognizes a frightening pattern. Is she next? The more her suspicions are confirmed, the further she is hurled into a climactic showdown that challenges her chances for survival and sanity.

Inspired by thrillers such as CARRIE and BLACK SWAN, AMBITION pulls you into a realm where desire and revenge converge into a questionable reality.

Extras:
Scream Factory's Blu-ray release of AMBITION is due out on Tuesday, November 5th and will cost between $15 - $18. You can order a copy today from AMAZON, BULL MOOSE, or directly from SHOUT! FACTORY.