Never Give Up! Never Surrender! - GALAXY QUEST Gets a Shiny New Steelbook Release! 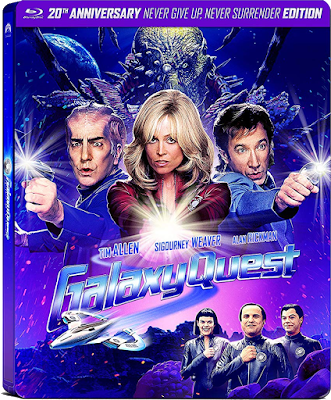 It's hard to believe that its been twenty years since GALAXY QUEST premiered in theaters. I think I saw it during its initial theatrical run, but most definitely recall owning it on VHS (and later Blu-ray disc), and I have to admit that I still really enjoy this movie! It's a fun flick with a phenomenal cast, that does a great job of poking fun at Star Trek and fandom in general.

And now GALAXY QUEST has apparently built up enough of a following to warrant a Steelbook re-release (i.e. repackaging) though it doesn't seem to have a new transfer or any new special features! But if you don't currently have this movie in your collection, then consider picking up the 20th Anniversary Steelbook today!

Synopsis: "By Grabthar's hammer," the intrepid crew of the NSEA Protector is back to celebrate the 20th anniversary of the uproarious classic GALAXY QUEST.

Years after cancellation, the stars of the Galaxy Quest television series cling to their careers appearing at sci-fi conventions and electronic store openings. When a distressed interstellar race mistakes the show for “historical documents,” Jason Nesmith (Tim Allen) and his crew of has-beens are unwittingly recruited to save them from a genocidal alien warlord!

Featuring an out-of-this-world all-star cast including Sigourney Weaver, Alan Rickman, Tony Shalhoub, Sam Rockwell, Enrico Colantoni, Daryl Mitchell, and Justin Long, this rollicking send-up of sci-fi fanaticism is as funny today as it was when it premiered in theaters 20 years ago.

Extras:
Paramount's Steelbook release of GALAXY QUEST is now available wherever Blu-rays are sold and should cost between $12 - $16! Get yourself a copy today from AMAZON or BULL MOOSE!