Watch Out For Snakes! - EEGAH is Now Available on Limited Edition Blu-ray! 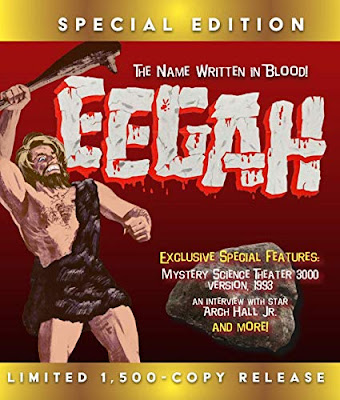 THE FILM DETECTIVE TEAMED UP WITH SOMETHING WEIRD VIDEO FOR A SUPER LIMITED SPECIAL EDITION BLU-RAY OF AN MST3K CLASSIC!

Had it not been for a little show called Mystery Science Theater 3000, EEGAH (along with hundreds of other film oddities) likely would have faded away into obscurity. Released in 1962 and created by Arch Hall Sr. as a sort of vanity project for his son, (singer Arch Hall Jr.) this strange movie contains several musical numbers, and Richard Kiel (THE SPY WHO LOVED ME, THINK BIG, HAPPY GILMORE) as a caveman still alive in modern times! And now, unbelievably, EEGAH has been given a 4K restoration and released to Blu-ray disc, thanks to the efforts of The Film Detective and Something Weird Video! But there are only 1,500 of these in existence so if you want a copy, order it immediately or forever live in regret!

Synopsis: Originally designed as a vehicle for his son, filmmaker Arch Hall Sr. assumed the roles of writer, producer, director, and actor to bring the film to fruition, utilizing pseudonyms like "Nicholas Merriwether" and "William Watters" to prevent his name from appearing multiple times in the credits.

Incorporating all of the rock 'n' roll, pop culture staples of the '60s, he added a rampaging, seven-foot-tall Neanderthal to create the thrilling comedy, which follows Eegah (Richard Kiel), a prehistoric caveman who is nearly run over by Roxy Miller (Marilyn Manning) on her way to a party. Forming a romantic interest in the young beauty, Eegah holds Roxy and her father (Hall Sr.) captive in his lair. It's up to local gas station attendant Tom Nelson (Hall Jr.) to rescue his sweetheart from the lovestruck brute.

Extras:
The Film Detective/Something Weird Blu-ray of EEGAH is ready to become part of your collection but again, do not tarry for long or you will miss out on owning this b-movie gem! The limited Special Edition of EEGAH should cost between $20 - $24, and is currently available to order from AMAZON, BULL MOOSE, and DIABOLIK DVD!