The Uncut Version of WEREWOLF IN A GIRLS' DORMITORY is Now Available on Blu-ray! 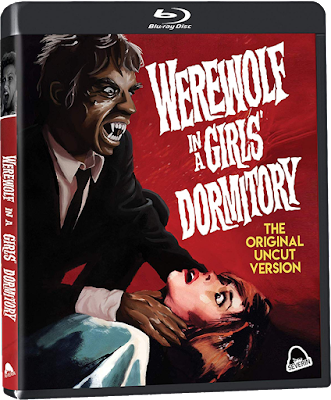 I gotta say, Severin Films has been knocking it out of the park in recent years, with fantastic releases of WAX MASK, KILLER CROCODILE, ALL THE COLORS OF THE DARK, THE CHANGELING, THE BLOOD ISLAND COLLECTION, and MORE! And now they've added the Italian/Australian co-production of WEREWOLF IN A GIRLS' DORMITORY to their growing catalog of exploitation cinema! The film is featured uncut with a new 2K restoration, several new special features, and a bonus CD containing the film's soundtrack! If that sounds absolutely mouth-watering to you, then continue reading for the full details of Severin's latest Blu-ray release!

Synopsis: Twisted Italian horror meets lurid German krimi in the 1961 EuroShocker filled with "genuinely eerie scenes and rather graphic maulings" (DVD Drive-In), now restored like you've never seen or heard it before! When an all-girl reform school is rocked by a series of grisly murders, it will unleash a nightmare of sexual corruption and lupine depravity.

Carl Schell (THE BLUE MAX), Barbara Lass (aka Roman Polanski's first wife Barbara Kwiatkowska), and Luciano Pigozzi (CASTLE OF THE LIVING DEAD) star in this infamous Italian/Austrian co-production – originally titled LYCANTHROPUS – directed by Paolo Heusch (THE DAY THE SKY EXPLODED) from a screenplay by giallo maestro Ernesto Gastaldi (ALL THE COLORS OF THE DARK) with a classic score by Armando Trovajoli (STRANGE SHADOWS IN AN EMPTY ROOM), newly scanned in 2k from archival elements recently discovered in a Rome lab vault!

Extras:
Severin's new release of WEREWOLF IN A GIRLS' DORMITORY is now available wherever Blu-ray discs are sold, and should cost between $25 - $28! Order a copy today from AMAZON, BULL MOOSE, DIABOLIK DVD, or directly from SEVERIN FILMS!