There's No Such Thing as a Free Ride - HITCH HIKE TO HELL Thumbs Its Way to Blu-ray on November 19th! 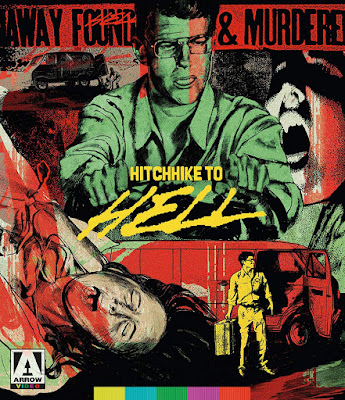 A MADMAN PREYS UPON YOUNG FEMALE HITCHHIKERS IN THIS NEW ARROW VIDEO RELEASE!

Irvin Berwick's HITCH HIKE TO HELL (not to be confused with the 1941 film of the same name) is a movie that I am totally unfamiliar with. Inspired by crimes pulled straight from newspaper headlines, the film follows a seemingly mild-mannered delivery van driver who picks up (often bra-less) young co-eds to satiate his (blood)lust! And only the only person that can stop his reign of terror is... The Professor from Gilligan's Island (Russell Johnson as Captain J.W. Shaw)?! Arrow Video has given this obscure title a new 2K restoration and extras, plus a reversible cover in case you don't dig the new artwork! To learn more about this upcoming Arrow release, continue reading!

Synopsis: Be careful who you hitch a ride with! All roads lead to terror in HITCH HIKE TO HELL, the delightfully sleazy cautionary tale from cult director Irvin Berwick (MALIBU HIGH, THE MONSTER OF PIEDRAS BLANCAS).

Howard is a mild-mannered momma's boy whose job running deliveries for a cleaning agency affords him a lot of time out on the road. It's not until he picks up young women who've run away from home that he transforms into a twitching, homicidal maniac, hellbent on meting out punishment for their "transgressions." Can the cops put a stop to Howard's demented spree before he claims yet another victim?

Influenced by the depraved crimes of the likes of "Co-ed Killer" Edmund Kemper, HITCH HIKE TO HELL is a bona fide American nightmare from the vaults of legendary exploitation producer Harry Novak (THE CHILD, TOYS ARE NOT FOR CHILDREN).

Extras:
Arrow Video's HITCH HIKE TO HELL Blu is scheduled for release on Tuesday, November 19th, and should cost between $23 - $28! You can order yourself a copy today from AMAZON, BULL MOOSE, DIABOLIK DVD, or directly from ARROW VIDEO!