After a relatively quiet October, Umbrella is back with a bunch of new releases that you'll want to add to your movie collections! In Kimble Rendall's forgotten slasher movie CUT, a killer starts knocking off a group of filmmakers that are trying to complete an unfinished fright flick, WWE wrestler CM PUNK stars as a stressed-out husband that is trying to remodel a house with a dark past in GIRL ON THE THIRD FLOOR, and Tanya Roberts stars as the titular character in SHEENA (i.e. the female BEASTMASTER)!

Also available this month are Tobe Hooper's immortal classic THE TEXAS CHAINSAW MASSACRE (in case you wanted to add yet another edition to your TCM collection) and a region free Blu-ray of YOUNG GUNS II, which features Emilio Estevez, Christian Slater, Lou Diamond Philips, and Kiefer Sutherland!

* On December 4th, Umbrella Entertainment is bringing Jeff Begos' BLISS to Region 4-locked DVD, which features a struggling artist that engages in a hedonistic lifestyle that somehow leads her to crave fresh human blood!

* Also available on that date is a new Blu-ray release of CONEHEADS, one of the few feature-length films based upon a SNL sketch that isn't terrible!

* IRON FISTS AND KUNG FU KICKS is probably the main Umbrella release I'm looking forward to the most next month. Produced by Veronica Fury (who also produced the fantastic ELECTRIC BOOGALOO doc) this new documentary chronicles the impact of Hong Kong cinema on the rest of the world's action cinema! 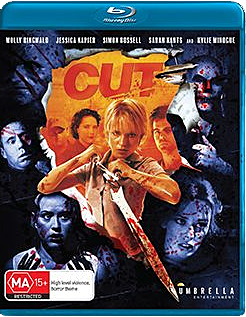 Synopsis: 1985. The cast and crew of the horror flick Hot Blooded are learning first hand what it means to be stalked by a masked killer. When the director (pop superstar, Kylie Minogue) is viciously murdered on set the production is shut down and the film locked away, incomplete. But every time the footage is screened, somebody dies...

Fourteen years later, a group of enthusiastic film students decide to finish Hot Blooded. Led by Raffy, the director (Jessica Napier - GHOST RIDER), and producer Hester (Sarah Kants - Ashes to Ashes), they manage to track down Vanessa Turnbill (Molly Ringwald - THE BREAKFAST CLUB, SIXTEEN CANDLES), the star of the original film who reluctantly agrees to return to Australia. After shooting commences on the original eerie location, the students start to disappear one by one. Now, they just have to finish the film before it finishes them! 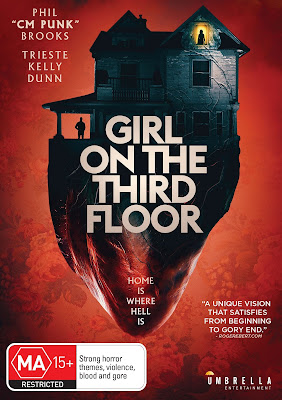 Synopsis: Bursting pipes, rotting walls, and unidentifiable slime were not what Don Koch (WWE legend Phil "CM Punk" Brooks) expected when he convinced his wife Liz (Trieste Kelly Dunn - Blindspot) that he could rehab their new Victorian home himself. In over his head, under duress, and tempted by his old weaknesses, Don soon discovers that the house has its own dark, sordid history and won't be so easy to renovate after all....

ORDER "GIRL ON THE THIRD FLOOR" ON DVD FROM UMBRELLA ENTERTAINMENT, OR PURCHASE IT ON DVD & BLU-RAY FROM AMAZON! 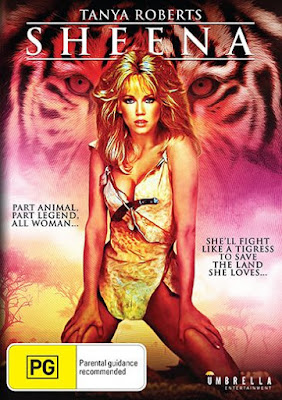 Synopsis: The Zambouli tribe raise a young white orphan whom their shaman believes to have been sent as part of a mystical prophecy, teaching her the ways of telepathic communication with animals. The girl grows up to be SHEENA, QUEEN OF THE JUNGLE (Tanya Roberts), and she is soon called upon to save the Zambouli from annihilation by Prince Otwani (Trevor Thomas), who wants the precious metal under the natives' land. Sheena is also aided by a reporter named Vic Casey (Ted Wass) who falls for her charms.


ORDER "SHEENA" ON DVD FROM UMBRELLA ENTERTAINMENT, OR ON BLU-RAY FROM AMAZON! 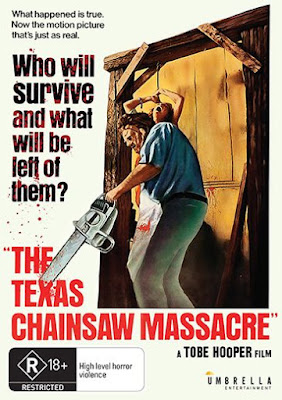 Synopsis: When THE TEXAS CHAINSAW MASSACRE hit movie theaters in 1974, it quickly supplanted the previous year's top horror flick, THE EXORCIST, as "the most terrifying movie ever made." But unlike William Friedkin's film, THE TEXAS CHAINSAW MASSACRE eschewed standard production values and modern special effects in favor of a grainy documentary-like approach with visceral, low-tech, in-your-face visual effects.

This tale of five young students who unwittingly meet up with a sinister hitchhiker and the mask-wearing maniac Leatherface (whose mask is actually made from dried human skin), turned a lumberjack's tool into the stuff of nightmares and the blood-curdling scream into an art form!

ORDER "THE TEXAS CHAINSAW MASSACRE" ON DVD FROM UMBRELLA ENTERTAINMENT OR PURCHASE IT ON BLU-RAY FROM AMAZON! 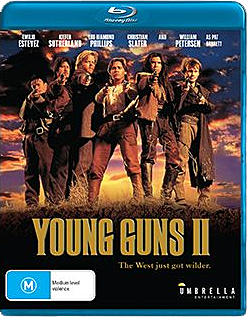 Synopsis: 1879 - The Lincoln County Wars have ended but bad blood endures. Billy the Kid's outlaw ingrates are penned like sows in a Lincoln County pit, and the Kid is trapped in a nearby hotel. But the hangman will go home disappointed tonight because Billy cleverly breaks himself - then his gang - free, and one of the West's greatest legends lives to ride another day! Now Billy and his men must elude Sheriff Pat Garrett (William Peterson - MULHOLLAND FALLS, MANHUNTER), and find safety by crossing over the border to Mexico!

Posted by The Vault Master at 1:44 AM