It's Time to RETURN TO NUKE 'EM HIGH Again With Troma's Latest Film! 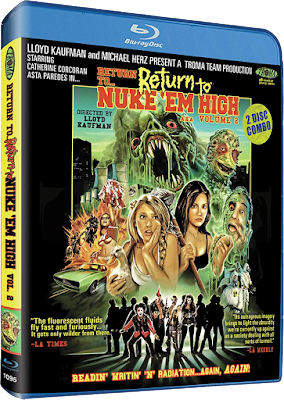 THERE WILL BE MUCH RETURNING IN THIS INSANE FOLLOWUP TO LLOYD KAUFMAN'S "RETURN TO NUKE 'EM HIGH VOLUME 1!"

I've always been a supporter of independent film, and I grew up on a steady diet of Troma flicks thanks to USA UP All Night! (Toxie, and Kabukiman, and Surf Nazis! Oh my!) But I admit that I haven't really paid Lloyd Kaufman and friends much mind since CITIZEN TOXIE and POULTRYGEIST. I guess a small part of it is that I grew up a bit and lost interest, but mostly it's because there's just too much competition out there these days. With so many indie filmmakers and distributors flooding the market week after week, trying as hard as they can to get their movies out to as many people as possible, it's getting harder to keep track!

That being said, the RETURN TO NUKE 'EM HIGH flicks look absolutely insane! Boobs, monsters, crazy characters, gallons of slime and bodily fluids, celebrity cameos - this pair of films has everything you could possibly want from a Troma production. And now, after seven years, the RETURN TO NUKE 'EM HIGH saga is complete with the release of VOLUME 2!

Synopsis: Welcome BACK to Tromaville High School! The once tone-deaf Glee Club has now turned into a vicious gang of Cretins, wreaking havoc upon Tromaville and two innocent lesbian lovers, Crissy and Lauren. As Lauren suffers the side-effects of a Cretin forced "duck rape," Chrissy follows a trail of tainted toxic taco crumbs, leading her to the crux of all Tromaville High School's mutating mires: The evil Tromorganic Foodstuffs Conglomerate and its salacious CEO, Lee Harvey Herzkauf!

With a duck/human hybrid baby in one hand and a laser in the other, the lesbian duo fights against Cretins, Monsters, and EVIL! Will they succeed or will Herzkauf and the Cretins reign supreme over Tromaville High School and the World!?

Extras:
RETURN TO... RETURN TO NUKE 'EM HIGH (AKA VOLUME 2) is now available on Blu-ray disc at most retailers, and should cost approximately $20! Rediscover your love of Troma today, and order a copy from either AMAZON or DIABOLIK DVD!